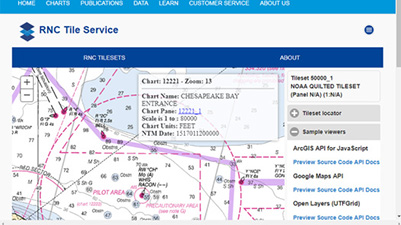 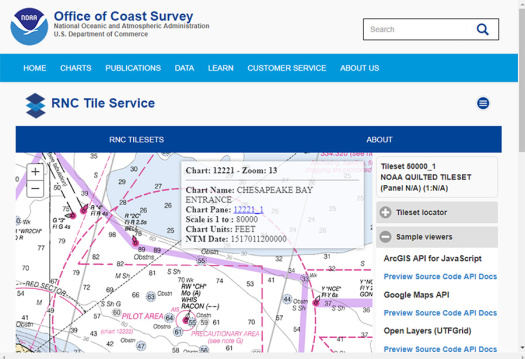 Lynker’s Chart Tile Service (CTS) project demonstrates our ability to bring innovative solutions using emerging technologies. Lynker began a NOS/OCS internally-funded mobile application demonstration project in 2011 that eventually evolved into the highly visible CTS infrastructure initiative, which has added tremendous value to NOAA in terms of reducing redundancies, streamlining secure data sharing, and improving overall quality of NOAA charting products. As critical, CTS has also met NOAA’s mission goal of increasing the usefulness, accuracy, and availability of its services to a wide range of stakeholders, many of whose businesses, safety, and livelihoods depend on MCD’s outputs.

Understanding that consuming nautical chart information on mobile devices would become increasingly important, Lynker began an Internal Research & Development (IR&D) project of a mobile app for mariners. The purpose was to display NOAA’s suite of 2,172 nautical chart datasets with Coast Pilot books. NOAA’s Office of Coast Survey (OCS) liked the idea, and tasked Lynker to develop the prototype into a production-level NOAA technology demonstration project, with a one-year lifespan. The app was called MyNOAACharts, and was released on Google Play in May 2013. MyNOAACharts was widely considered a great success, with thousands of users and an excellent 4.6 rating.

Feedback on the demonstration app uncovered issues within other commercial chart plotters and mobile chart viewer apps. Many of these systems were reformatting NOAA charts, without any standard, and were not updating charts frequently for their customers due to the complexity and cost of the effort. This resulted in out-of-date and incomplete data, creating dangers to navigation.

That is when OCS and Lynker had an idea. What if, instead of offering a single NOAA mobile app directly to mariners and boaters, NOAA created the enterprise architecture and infrastructure to provide a free, standard, Cloud-based, pre-packaged chart tile service, updated weekly, with a defined Application Programming Interface (API) to the maritime electronics industry? Industry would add value-added content and determine the end products. This way, NOAA would provide a portal of chart information to industry that would be leveraged to millions of their customers – a force multiplier. Lynker, in collaboration with OCS, confirmed strong industry interest at Lynker-hosted industry days, and OCS directed Lynker to begin work on the CTS. Lynker developed a relationship with Amazon Web Services and deployed the prototypes on the Amazon cloud. This successful strategy facilitated a smooth integration with NOAA’s Integrated Dissemination Portal (IDP), our current hosting environment.

CTS completed its successful first public release in December 2015. One user on Facebook happily reported that “I’m super-impressed with the NOAA developers (Lynker employees)” Lynker helped OCS recognize an opportunity to increase the value of existing chart products and services to thousands of stakeholders, leveraging cloud and mobile technologies.