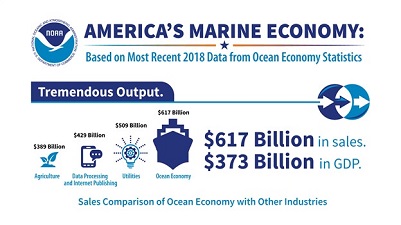 NOAA and the Bureau of Economic Analysis recently released new statistics highlighting the marine economy’s contribution to the Nation’s economy. The statistics, prepared under a newly developed method of calculation, provide the results of a more comprehensive measurement of the marine contribution to the nation’s gross domestic product (GDP) than existed previously. Lynker team members worked with staff at NOAA’s Office for Coastal Management and the Bureau of Economic Analysis to calculate and analyze these new results. Data are available from 2014 to 2018 and are slated next year to be updated again as well as adjusted for inflation and price effects. These statistics offer national estimates for all ocean, coastal and Great Lakes related economic activity by major industry across ten sectors helping us to understand the current state of the marine economy.

The new economic statistics measure the marine economy as a percentage of the U.S. GDP and total output and value added, as well as information on other economic indicators. The marine economy grew faster than the U.S. economy as a whole from 2017 to 2018 – growing by 5.8% (compared to 5.4% US GDP growth) and supporting 2.3 million jobs in 2018 alone. The U.S. marine economy accounted for 1.8% or $372.8 billion of the nation’s GDP in 2018. The top three marine economy sectors making the largest contributions to the nation’s GDP are tourism and recreation (including recreational fishing), national defense and public administration, and offshore minerals.

In addition to the findings, because these new official figures are calculated in consistent ways with how GDP is measured, officials can now compare the marine economy against comparable figures from other countries. The statistics provide valuable information to policy makers and industry, helping them to inform decision-making and track progress, helping planning future investment in the marine environment. 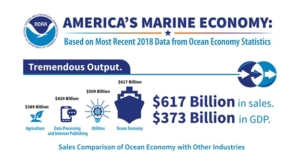 Contending with COVID: Lynker Innovates to Address the Coronavirus and Help...